You can now officially circle the dates of November 15 – 25 as the 2014 Missouri Gun Season for Whitetails. The Missouri Department of Conservation approved the dates for a variety of hunting seasons during its December session.  Here’s a look at a few of the important dates… Firearms turkey season dates are: ·         Youth season – April 12-13, 2014 ·         Regular […] 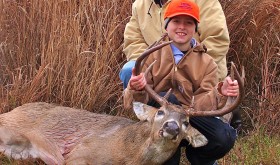 One of the hardest things to do as a hunter is to be patient.  As long as you’re in the woods, you want the deer to start moving early and stay on their feet. The reality of the situation is that deer move on their own timetable which can lead to some frustrating trips to […]

When the opportunity to chase a unique whitetail comes along a hunter simply has to jump at the chance.  In 2009 that exact opportunity came my way when a one-of-a-kind non-typical came into the picture. This was a buck I knew all to well as I had seen him at various points during previous season. […]

Most of us would call it a good day when you bag a trophy buck. If that’s the case… what kind of day is it when you harvest a pair of trophies? “We have bought several tracts of land from Donnie McClellan. He knows big deer and what to look for in a hunting farm. […]

There is a certain level of satisfaction you feel when hard work and dedication payoff.  The countless hours spent laboring on the various tasks needed in order to accomplish what you set out to do.  Honestly, it simply brings a smile to your face. This deer season Joseph Finger experienced this feeling once again at […]